Whether you’re planning on building a carport, patio, pergola, verandah or deck, one of the regular concerns for homeowners is meeting council regulations and other authority needs. We know, because it’s one of the first questions we’re often asked when we … Continued If there’s one sure way of designing and building an outdoor structure that will be a style winner, it’s by matching it as closely as possible to the design of the home. As in this example of a beautiful tiled … Continued A Sydney carport is a fantastic investment, particularly when the weather is hot, freezing cold or rainy. But what do you do when your Sydney single carport has become a bit small for the needs of the family? You call … Continued How can you build your outside project to comply with council regulations?

Faced with strict heritage listing regulations, many homeowners may have given up building their dream carport. But with the help of Ron Matz from Outside Concepts in Kew, this homeowner has turned the council regulations to her advantage, building a … Continued Blending the existing with the new a hip project

One of the keys to designing outside structures that are not only practical but also look great is to ensure the new project is sympathetic to the existing structures. When a client from Kinglake asked Ron Matz & Brian Ebejer … Continued How can you add style to your new carport? 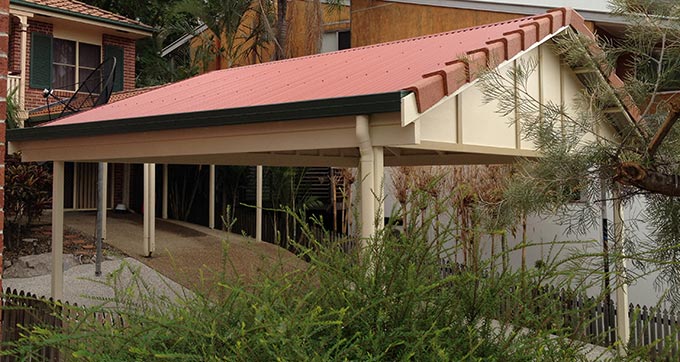 A Brisbane double carport on a budget

Most of the projects that Outside Concepts approaches have specific challenges and it was no different when homeowners from the Brisbane suburb of Indooroopilly employed Martyn Hewett from Outside Concepts Kenmore Branch to design and build a double carport. With … Continued A Melbourne carport that fits the current trend

When a client asked Rohan Burch from Outside Concepts Dandenong Branch to create a simple yet stylish carport, together the client and Rohan decided that a carport that fitted the current trend was required. To meet the objective, used blueboard … Continued How do you create a gable roof carport in a triangular space?

This was the challenge that faced the team from Outside Concepts Dandenong. Further adding to the difficulty was the fact the carport had to connect to a house eave that varied by 1.5 metres. The tailor made solution was to combine … Continued